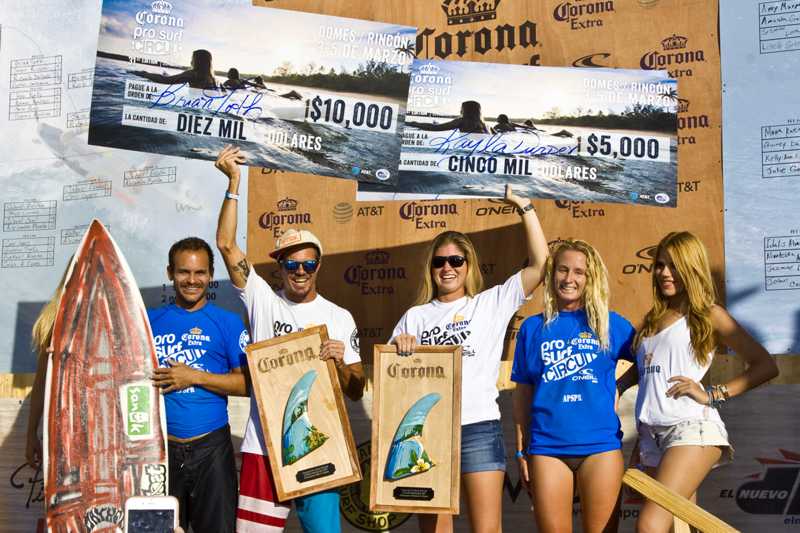 Toth channeled his stand-out performance on day one into a $10,000 champion check on the final day. He stayed consistent catching rights and lefts annihilating them with sharp pocket surfing. The final showdown was between Brian Toth and Alejandro Moreda. Both surfers opened the heat up with good waves but Toth was able to hold the win with the second highest heat score of the day a 16.17. Moreda also posted multiple good by putting his power surfing on display. Other top performances of day were semi finalists Ricardo Delgado (PR) and Gabriel Escudero (PR). The highest wave and heat score total was awarded to Escudero with a 9.0 and a 17.03, he received the O’Neill Performance of the Event award for $1,000. Escudero and Delgado entertained the crowd with their air reverses and long combinations. Both were able to use his speed to make long sections where other surfers were getting caught behind.

Kayla Durden (Fl) came out with the victory on the women’s side of competition. Durden was able to find herself on the better waves and utilize her priority toward a win over reigning champ, Alexis Engstrom (NY) and take home the $5,000 first prize check. Although she came up short in the final, Engstrom was able to put up a great performance during the whole event. Durden win the O’Neill Performance of the Event award for her high heat total a 13.33 and receive a check for $1,000.  Other top surfers on the women’s side were semi-finalists Quincy Davis (NY) and Idalis Alvarado (PR).  Davis had a notable performance in her semi-final narrowly losing to Durden.

The generous sponsors of the Corona Extra Pro Circuit are: