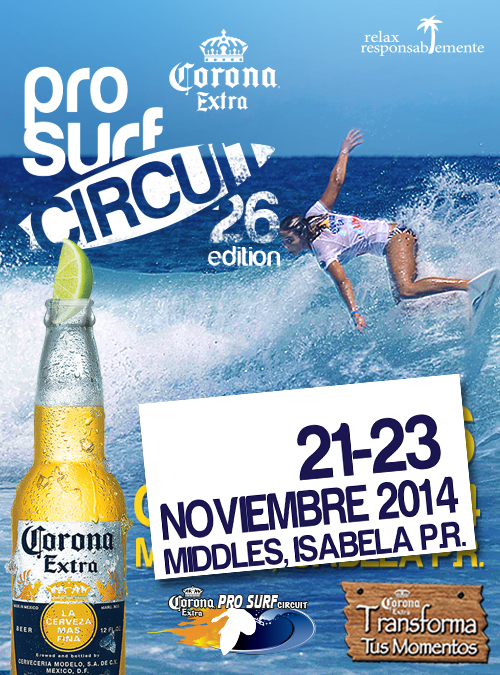 The current forecast for this weekend in Puerto Rico shows a 4' to 7' swell on tap for Middles, for the 26th edition of the Corona Extra Surf Circuit. "It may be windy", said Contest Director Werner Vega, "But we should have plenty of waves to run the event".
The original dates for the contest were October 25 and 26. However, Vega, who monitors the island surf forecasts carefully, decided to postpone until November due to the swell predictions. As it turned out, the conditions last month, on the original dates, ranged from flat to 3 feet and poor for competition. "They were not the type of conditions in which we wanted to select our champions", said Vega. "Mother Nature" controls our playing field, and we want the competitors and spectators to enjoy the quality of surf that Puerto Rico is famous for." The contest will have a $25,000 total prize purse for the Men's division and $12,000 awarded to the Women.

With entries now closed, the seed draw shows many familiar names set to compete. Top-rated Mainland visitors among the men are Leif Kelaki Engstrom, 26, from New York, and Gabe Kling,34, from Florida. Kling is the most successful visiting Mainland surfer in the history of the Corona Circuit, having been a previous winner at Middles in 2012. He also won the 2013 event at Marias, when giant surf forced the organizers to shuttle the competitors into the lineup on jet skis.
On the Women's side of the draw, Chelsea Tuach,18, from Barbados, returns to compete again after winning last October's event at Middles. Tuach should
be in top form, as she just won the Soup Bowl Pro Junior last weekend on her home island.

With the season's final rankings to be decided this weekend, Tuach holds a very slim lead over Mainland competitors Nikki Viesins and Alexis Engstrom. Also still in the running for the Women's title are P.R. locals Amy Murphree
and Idalis Alvarado.

The current leader of the Mens title race is Gabriel Escudero, 28, who has a total of 3255 points for the season. The race for the season title is comprised of the total points that the competitors collect in three events. Escudero won the last event at Domes in March and placed second at Middles last October. However, several of his competitors are still in striking range, notably Wesley Toth in second place, who is less than a thousand points behind. Wesley won the last event at Middles in a close final over Gabriel. Also still in the running are Toth's older brother Brian, and Alejandro Moreda. Cody Thompson, from Jacksonville, is the highest rated Mainland competitor at equal third.

This year the two circuit champions will also get a bonus cash prize. "Corona has announced that Coppertone Sunscreen Lotion will award the 2014 champion of each division with a $1,000 bonus" said Vega. "This is a big step, as the extra prize money rewards both circuit champs for their consistency over the course of a full season".

The Corona Extra Pro Surf Circuit, was founded by Werner Vega and wife Viviannee Vega in 2001. "Since we began thirteen years ago Corona Extra has been the biggest supporter of Puerto Rican pro surfers. We are thrilled to see Coppertone join them with their support",

Surfing fans who are unable to attend in person at Isabela this weekend will once again have the opportunity to follow the action online with the popular "Heats on Demand" feature. "They will have access to every scoring ride of the event", said APSPR Event Coordinator, Viviannee Vega. "On our website < www.apspr.net > you can scan the draw, and select which heat you would like to watch, and much more." Each scoring ride is shown, along with the points earned for that wave, through the technology of the Beach Byte computer scoring system. All of that scoring information is then available on the APSPR website to anyone with access to a modem.