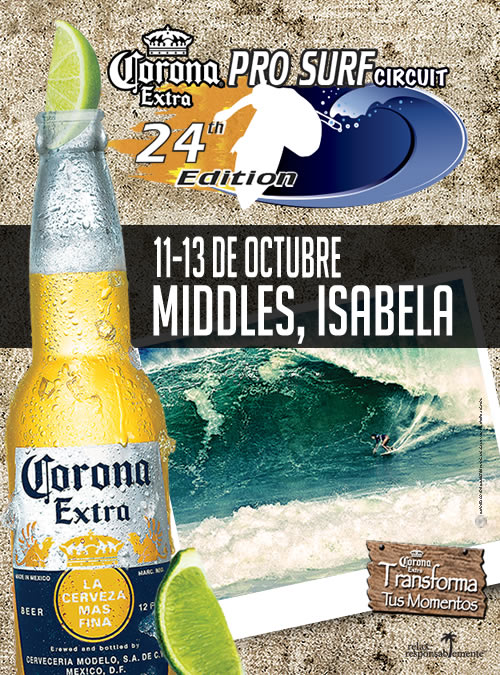 On the weekend of October 12 and 13 exciting pro surfing action returns to Puerto Rico at scenic Middles Beach near Isabela. This will be the 24th edition of the Corona Extra Pro Surf Circuit, which was founded in 2001 by Werner Vega, surfboard shaper and owner of Hang Loose Surf Shop, also in Isabela. “Since we began twelve years ago Corona Extra has been the biggest supporter of Puerto Rican pro surfers” said Mr. Vega. The continued support of Corona Extra shows a huge commitment to the sport and it’s athletes. The contest will have a total purse of $37,000, divided into $25,000 for the Men and $12,000 for the Women, which means that we will be able to pay the winner of the Men a first prize of $10,000. The Women’s champion will receive $5,000”.

A field of 60 or more contestants is expected that will include competitors from the Mainland East Coast, California and Venezuela.

The Middles contest will also kick off the points race to crown the 2014 APSPR (Association of Professional Surfers of Puerto Rico) season’s champions. The 2013 defending champions are Brian Toth, of Isabela and Alexis Engstrom, of Montauk, NY and Rincon. The race for the title is comprised of the points that the competitors collect in three events. After Middles next month they will then compete at Domes next March, and again at Middles in the Fall of 2014.

The last event of the Corona Extra Circuit was won by Gabe Kling, of St. Augustine, Florida in huge and challenging conditions at Marias Beach, in Rincon, in March. In that event the giant size of the surf forced organizers to assemble a group of personal watercraft operators who carried the surfers out into the lineup. Paddling out was simply not possible in the time limit of the 45 minute heats. “That was one of the most exciting contests I have ever been in” said Kling. ”Without the skis, I don’t think I would have even made it out”.

The giant swells that are pushed southward by cold fronts in the Northern Hemisphere are the attraction that has lured International surfers to Puerto Rico for fifty years.

His victory at Maria’s was the second in a row for Kling, who had previously won the 2012 event at Middles. However, local Isabela surfer Brian Toth was able to clinch the season’s title because of his remarkable consistency. In all three events Toth never placed lower than third. Toth is now a four-time champion of the APSPR Circuit and the most successful Puerto Rican surfer ever, having competed for several years on the international ASP (Association of Surfing Professionals) World Tour. Both Kling and Toth, who are good friends, are expected to compete at Middles and renew their rivalry. Rounding out the Men’s top five for the 2013 season were Josie Graves and Jose Tavarez of Puerto Rico and Francisco Bellorin, of Venezuela.

On the Women’s side of the draw Alexis Engstrom finished as the circuit champion by virtue of a narrow victory in the final at Maria’s over Maria Kuzmovich, of Daytona Beach, Florida. Like many Mainland surfers, Engstrom and Kuzmovich spend their winters in Puerto Rico to take advantage of the warm weather and waves.

The rest of the Women’s top five for the season were Amy Murphree of Puerto Rico,

You can register online at www.apspr.net and do payment via Paypal, or download entry form and mail it with payment to APSPR address on the entry form header.

Entries should be received no later than Wednesday, October 2nd, after October 2nd a late entry fee of $35.00 will be charged.

“Surfing fans who are unable to attend in person at Middles will once again have the opportunity to follow the action online with the popular “Heats on Demand” feature”, said APSPR Event Coordinator, Viviannee Vega. They will have access to every scoring ride of the event. On our website < www.apspr.net > you can scan the draw, and select which heat you would like to view and much more. Each scoring ride is shown, along with the points earned for that wave, through the technology of the Beach Byte computer scoring system. Each of the five judges enters their scores for each surfer’s rides into the computer, which tallies the points and decides the winners. All of that scoring information is then available on the APSPR website to anyone with access to a modem.